Today’s Question of the week comes from a fellow blogger – weigh in your thoughts and by the week’s end, I will share mine.  This should be interesting!! GO!

I am going to respond to this week’s question with two simple words: Jesus wept.

Jesus was anything but weak.  Jesus was fully man and fully God. (If you need further explanation on this – you can ask Him when you get to heaven 🙂 ).  I know many of us have heard this verse before.  Today I want to examine the context of this verse to understand the necessity and purpose of our tears.

The Death of Lazarus

11 Now a man named Lazarus was sick. He was from Bethany, the village of Mary and her sister Martha. 2 (This Mary, whose brother Lazarus now lay sick, was the same one who poured perfume on the Lord and wiped his feet with her hair.) 3 So the sisters sent word to Jesus, “Lord, the one you love is sick.”

4 When he heard this, Jesus said, “This sickness will not end in death. No, it is for God’s glory so that God’s Son may be glorified through it.” 5 Now Jesus loved Martha and her sister and Lazarus. 6 So when he heard that Lazarus was sick, he stayed where he was two more days, 7 and then he said to his disciples, “Let us go back to Judea.”….

11 After he had said this, he went on to tell them, “Our friend Lazarus has fallen asleep; but I am going there to wake him up.”

12 His disciples replied, “Lord, if he sleeps, he will get better.” 13 Jesus had been speaking of his death, but his disciples thought he meant natural sleep.

Jesus waited until Lazarus had been dead four days before he arrived to wake him from the dead.  There is always purpose and layers of purpose in His actions and movements in our lives.  This story is no exception.  Here Jesus needed those who were watching and following to understand with certainty the fact of Lazarus’ death.  “15 and for your sake I am glad I was not there, so that you may believe.”  One layer here is to demonstrate the power of Christ through the Father.  Interesting enough, Jesus did not doubt the power within Him to raise Lazarus from the dead.  Yet, as we read further along in the passage, we see Him modeling His humanity as well – the second layer.

32 When Mary reached the place where Jesus was and saw him, she fell at his feet and said, “Lord, if you had been here, my brother would not have died.”

33 When Jesus saw her weeping, and the Jews who had come along with her also weeping, he was deeply moved in spirit and troubled. 34 “Where have you laid him?” he asked.

“Come and see, Lord,” they replied.

Jesus wept.  He felt sadness and allowed Himself to express it.  That was not weakness.  Those in observance attributed it to the depth of His love.   Jesus allowed Himself to weep and to feel the sadness, BUT He did not stay there.  He continued to move, as He was called, to fulfill the Father’s will.  But nowhere in here was this seen as a sign of weakness — it was a natural emotion considering the death of His beloved friend (even knowing He was going to bring him back to life).  Some commentaries say that He was grieving the lack of faith from those who followed.  I think that we become scared of allowing ourselves to feel sadness or pain because we are worried that we will become stuck there.   The reality is if we do not deal with our pain, it will ultimately hold us back.  Nothing irritates me more than the “encouragement” that comes in the form of this statement, “Be strong” when it reinforces not showing emotion.  If strength is seen as an avoidance of feeling, then I do not want any part of that.  True strength comes from facing our heartaches and trials head on and dealing with what comes…like Jesus did in the days and weeks leading to the cross.  He cried out to God while there, demonstrating that He felt the pain, He felt the burden of our sin,  He felt the absence of the Father under the weight of our sin, AND He kept on moving and endured the cross for us and for God’s glory.

This is a longer post, but I could have easily added more, because I feel that this is a part of becoming unplugged.  By truly modeling our emotions, actions and direction after the One who modeled perfection.  We have become so lost in the ideals of our culture that we have forgotten the origins of how and why we were created.  Continue to seek after your purpose in this life and I believe that you will find true freedom.  I will leave you with this quote that I captured from a fellow therapist, “We need to feel, in order to deal, so that we can heal.”  Be strong my friends and start feeling.

Today’s post is connected to this week’s Question of the week: If you had a friend who spoke to you in the same way that you sometimes speak to yourself, how long would you allow this person to be your friend?

My son is one of the most creative, funniest, left of center, out-of-the-box thinkers that I know.  And I seriously do not say that because he is mine, anyone who knows him would say that same.

Which brings me to this little gem I found in his backpack:

Yes, you read that correctly, he wrote (and served) a restraining order!  He’s in middle school and the son of a therapist, so maybe that gives a little explanation as to how he came up with this? lol! (Though I absolutely take zero credit :))  Raising Isaiah has been a wonderful adventure and I am grateful for the opportunity to lead him.  I will say that when I slow down and press in close enough, he has often taught me.

Now, I have blurred the names to protect the ‘innocent’- 🙂  But I wanted you to have a real visual as to what he did.  When I asked him why he “filed” a restraining order, he said he and a friend had continually asked the classmate to stop bothering them in class and he wouldn’t stop, so they took the next logical step 🙂 and drafted a restraining order, with witnesses and all!  He had a problem, he addressed it directly, that didn’t work and he took it to another level.  (He is friends with the ‘defendant’ in this case, but he just wasn’t going to tolerate the persistent irritation.)  He wasn’t content with the constant negativity that met him each day and he wasn’t going to allow it to become the norm.  We should all do the same – why do we allow our negative thoughts to drive our behavior and dictate our mood?

2 Corinthians 10:5, reads, “We demolish arguments and every pretension that sets itself up against the knowledge of God, and we take captive every thought to make it obedient to Christ.”  NIV

That is some pretty strong language there – demolish, take captive…God knew how difficult it was going to be to wrestle our thoughts to make them fall in line with His truth about His creation — His masterpieces.   He gave us directives, not suggestions.  He gives us His word to cling onto to remind us that we do not have to live captive to the lies we tell ourselves.  So today, on Isaiah’s birthday, I present to you the “Isaiah Challenge” and implore you to file a restraining order against the lies that bind.   The lies that tell you you are not good enough, that keep you wrestling with jealousy, that keep you pinned down by the memories of the mistakes of the past…that stifle your voice —that prevent you from fully experiencing the freedom that you have been given through a relationship with Christ.  Tell those thoughts where they need to go and what they are and are not permitted to do.  Take back the control over your temperament and your feelings.  If you feel heavily weighed down by these thoughts I highly suggest that you seek out a Christian counselor in your area to help walk you through this process.  YOU DO NOT NEED TO LIVE THIS WAY.  Get your truth in order and serve the devil his papers today!

If you had a friend who spoke to you in the same way that you sometimes speak to yourself, how long would you allow this person to be your friend?

This week’s question is rhetorical and will tie into a post I am working on.  As always please feel free to comment – we want to hear your voice! …stay tuned! 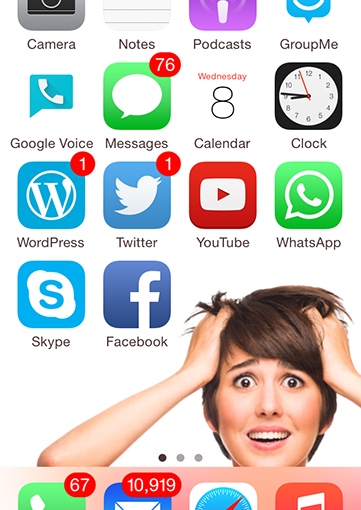 The days of social media have gotten us so “engaged” in each others’ lives…virtually engaged.  At the beginning of this year I came off most social media sites: facebook, instagram, etc.  I know—the majors.  I kept twitter mostly for work/educational purposes, but rarely viewed it.  As a result I had to continually remind my friends (my real ones) that if you want me to know something, “You’re going to have to tell me, not tag me.”  It’s wild that that is such an abnormal idea these days.  I fear for the millenials and beyond.

One common question I heard during this transition was, “Oh are you fasting?”  My response, “No, I am just off of social media and I feel better for it.”  My mind was clearer, I was focused on things that mattered; things that required my full attention.  I became more intentional to spend time with people in real life, to check on people in person – to engage in this new invention called “eye contact”.  Try it – it’s amazing! 🙂 I had to get “offline” to get back “inline”.  It became so draining, so dissatisfying! I needed to detox from the whole system of caring about likes (to be honest I really didn’t care about that part) and perusing others’ posts and profiles and get inline with making time for family, friends, proper rest and accomplishing goals instead.  For the purposes of this website I am back to using Facebook, but only to engage others —I login and log right back out.  I refuse to allow myself to sit idle anymore and allow time to fly by and have nothing of value to show for it; especially when I knew God had called me to greater things. Yikes.

Social media does have its notable benefits, naturally, but I do challenge you all to assess your use of social media and find a healthy balance.  I found mine and am better off for it! Please share your tricks on how you manage your social media mania.