Today’s post is connected to this week’s Question of the week: If you had a friend who spoke to you in the same way that you sometimes speak to yourself, how long would you allow this person to be your friend?

My son is one of the most creative, funniest, left of center, out-of-the-box thinkers that I know.  And I seriously do not say that because he is mine, anyone who knows him would say that same.

Which brings me to this little gem I found in his backpack: 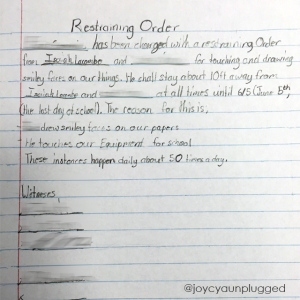 Yes, you read that correctly, he wrote (and served) a restraining order!  He’s in middle school and the son of a therapist, so maybe that gives a little explanation as to how he came up with this? lol! (Though I absolutely take zero credit :))  Raising Isaiah has been a wonderful adventure and I am grateful for the opportunity to lead him.  I will say that when I slow down and press in close enough, he has often taught me.

Now, I have blurred the names to protect the ‘innocent’- 🙂  But I wanted you to have a real visual as to what he did.  When I asked him why he “filed” a restraining order, he said he and a friend had continually asked the classmate to stop bothering them in class and he wouldn’t stop, so they took the next logical step 🙂 and drafted a restraining order, with witnesses and all!  He had a problem, he addressed it directly, that didn’t work and he took it to another level.  (He is friends with the ‘defendant’ in this case, but he just wasn’t going to tolerate the persistent irritation.)  He wasn’t content with the constant negativity that met him each day and he wasn’t going to allow it to become the norm.  We should all do the same – why do we allow our negative thoughts to drive our behavior and dictate our mood?

2 Corinthians 10:5, reads, “We demolish arguments and every pretension that sets itself up against the knowledge of God, and we take captive every thought to make it obedient to Christ.”  NIV

That is some pretty strong language there – demolish, take captive…God knew how difficult it was going to be to wrestle our thoughts to make them fall in line with His truth about His creation — His masterpieces.   He gave us directives, not suggestions.  He gives us His word to cling onto to remind us that we do not have to live captive to the lies we tell ourselves.  So today, on Isaiah’s birthday, I present to you the “Isaiah Challenge” and implore you to file a restraining order against the lies that bind.   The lies that tell you you are not good enough, that keep you wrestling with jealousy, that keep you pinned down by the memories of the mistakes of the past…that stifle your voice —that prevent you from fully experiencing the freedom that you have been given through a relationship with Christ.  Tell those thoughts where they need to go and what they are and are not permitted to do.  Take back the control over your temperament and your feelings.  If you feel heavily weighed down by these thoughts I highly suggest that you seek out a Christian counselor in your area to help walk you through this process.  YOU DO NOT NEED TO LIVE THIS WAY.  Get your truth in order and serve the devil his papers today!

4 thoughts on “File a Restraining Order”