The election season is upon us and tonight is the first of the Republican debates.  Regardless of which party you identify with, if by this time next year, you have heard from all of the candidates and you remain undecided, would you cast a vote in November for our next president or would you choose to abstain?  Why or why not?

Today marks an historic event, nearly one month after the slaying of nine African Americans as they gathered to pray, South Carolina removed the confederate flag from the state capitol grounds.  And I am glad.

I was on vacation in the mountains of North Carolina, when I first heard news of a shooting.  We had traveled from Florida with five other families to disconnect and recharge for a week.  With very little cell coverage, if any where we stayed, we heard bits and pieces of news of a shooting in a church, but knew very little details.  The following depicts our conversation in the early part of our ride home as we became privy to the reality of what had occurred.

“People died in that shooting.”

“Nine. The shooter intentionally left one alive to relay a message…and he’s still at large.”

There were four passengers in my car, two black, two white.

My son, fourteen years old, removed his headphones to ask, “Can we stop to use the restroom?”

My immediate response was, “NO!”  My eyes had just caught sight of the sign declaring our official entry into Charleston, South Carolina.

Unfortunately, out of necessity we had to make a stop, but I warned my young backseat travelers that it needed to be quick and why.  I recall the emotional temperature of that gas station distinctly.  Managed by both black and white employees, the vibe was still…sullen, eerily quiet, a stark difference from the culture we’d left behind in North Carolina.

As we returned to the car and resumed the conversation, I found myself saying immediately to my friend, “This guy is not well.”

In the days that followed I pondered upon how quickly I ran to that conclusion.  As a disclaimer, I would not say this was due to the nature of my profession, but to the natural observance of the capacity of human nature.  I had to make sense of this tragedy quickly and my first response was to find him sick, not full of hate.  Later on I understood that I couldn’t allow my mind to entertain that level of evil, therefore I gave him another label that quickly put the scarier thought to rest — he was sick.  That was that.  He couldn’t really have wanted to kill those people who kindly invited him into their prayer group, whose presence he sat in for an hour, who likely showed him God’s love during their last moments on this earth.  NO, he was sick, not hateful.

And that was the delusion that I chose to take comfort in.

Our nation has been on the verge of racial unrest as we are questioning the responses of our men in uniform as black men are dying, in circumstances where their white counterparts are not.  We debate the minute details on social media platforms to determine if fair treatment was given to those held in custody, while raw video footage tells a different story.

A fraternity out of Oklahoma State University is removed from campus and its members expelled after it is revealed they boldly recited a racist chant in unison en route to an event. (CNN OSU).

Stories like this reinforce the reality that we are in danger of a term I call — ignorant ignorance.  Ignorant, out of innocence because you simply aren’t aware, coupled with ignorance because you speak words you do not care to educate yourself about.

I am believing this is part of the problem.  We may have fast forwarded through the ugliness of segregation and racial inequality so quickly, that we have new generations that are not completely void of racism, yet do not truly understand how far we’ve come because we do not want to talk about it…and potentially admit it still exists.  Racism does and will continue to exist, if we do not continue to take active stances against it.

Today the flag came down and I am glad.  As a child this was a symbol of hatred and something I feared.  As an adult I understood other layers of symbolism behind it, but the undertones still remained.  Let’s not wait for another undeniably hateful tragedy for movement to continue forging in the right direction.  We cannot continue to brush this problem under the rug, we are indebted to those who fought so hard to bring us to where we are today.  Let’s set the fear of “stirring the pot” aside and work together to radically change our future.  We owe it to our past. 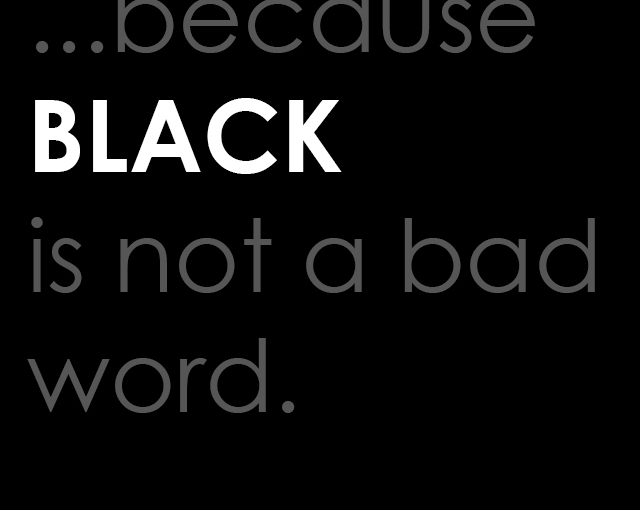 I have the sweet pleasure of volunteering and being in a position of influence for teens.  I do not take this position lightly.  It is a blessing to be able to relax and kick back with these girls as a mentor, but please hear me in this – I learn from them too!  And I’ll let you in on a little secret, sometimes they may drop a new word or phrase and I roll with it like I totally know what they’re talking about…only to slip away to my trusted friend google to maintain my cool points ;).  The real truth is they know that I may always be a step behind the new stuff, but I will always be a step ahead with the old stuff.  Speaking of, I’m about to blend an old thought with a new one – BLACK IS NOT A BAD WORD.  Let’s unpack this statement for a minute.  In the context of race, I think you all know what I am talking about.  And let me set the stage for my perspective in this conversation before I completely unpack.  I have traveled to various countries as well as all over the U.S..  I am currently living and have lived most of my adult life in South Florida.   South Florida is home to a blend of cultures, nationalities and religions; and a point of entry for many immigrants still today.  I bring up these details because it has been my experience that even in this environment, our kids are still hesitant to use the word, “black” (or African American) when describing a person.  Yet, I have no problem using the words ‘white’,’ Latino’, ‘Asian’ and yes, even ‘black’….because black is NOT a bad word…unless somehow, somewhere our kids are still taught that it is.  It was interesting to view the vast responses to Ferguson and the stories that followed.  Those who were bold enough (*please read through my sarcasm*) to sit behind a keyboard and site their opinions online may not have been as bold in person – why?  These situations will not change unless we are willing to take the stigma away from having open conversations instead of carrying on in private.  We have come a LONG way as a society, but we certainly have a long way to go.  I believe we may have become stagnant because we are afraid to ruffle the feathers of the nation or of our communities, but guess what — it’s happening anyway.

Our kids do interact with each other, and I would say for the most part do so well; BUT we cannot be ignorant to the fact that our longstanding opinions of each other have indeed infiltrated this millennial generation.  I recall an opportunity recently that I used as a teachable moment.  A young girl (teen) was excitedly telling me a story about a performer.   In her excitement she forgot his name and began to describe him instead.  I quickly knew who she was referring to, but I paused as I watched her hesitate and search for every other word to describe him but “black”.  We have a great rapport, so I allowed it for a minute before I finally said, “He’s ‘black’, you can say it.  If I were to describe you to someone else I would say ‘white’.  There is nothing wrong with that.”  A bright smile revealed her relief.  She may have felt uncomfortable saying that word in front of me, but she didn’t need to be and I needed her to know that.  I told her, “black is not a bad word.”

So I challenge you to begin interacting with others, not just on your commonalities but on your differences – this is the only way that we will truly learn from each other and put the mistakes of the past in the past.